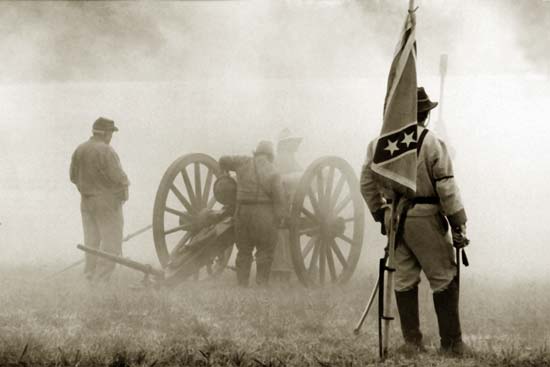 This page is unique in our collection of EVP ghost voices in that it is about a recording that
was taken recently that isn't a voice at all.
Moreover....I really don't know how to describe it.
Basically, I suppose it would qualify to be catagorized as a "Residual Haunting".
A residual haunting in some respects is not really a haunting at all.
No one really understand the hows or whys of it, but for some reason, certain events, especially events that
are filled with intense emotions, somehow seem to get "written" into the very fabric of the earth on which they occured.
People who experiance residual hauntings frequently report seeing the same scene unfold time and again.
The spirit or spirits involved seem oblivious to the beholders and seem to be stuck in an endless rerun of
the event in question.
So the question is this, are residual hauntings really hauntings at all?
Or are they simply a mindless record of tramatic events that occured long ago?

Okay...on to the recording I was telling you about.
A couple of weeks ago, in the first week of May 2005, my Mother and daughter Megan set out one afternoon on
a little road trip in search of geneological information for our family tree.
My mom has worked for years compiling the information and she is constantly in search of old cemeteries that
might yeild clues for her geneology book.
Anyway....on such roadtrips it is common for her to borrow a recorder.
As she goes about walking through
these cemeteries she frequently turns on the recorder and sets it on a stone to record as she is exploring the site.
The recorder and tape is then returned to me and over the next few days I listen carefully to it to see if and
EVP's were captured as a result.
When mom turns on the recorder, she always speaks aloud and announces the date, the location, and other
things such as weather conditions.
She and Megan know that they are to be alert for any natural sounds that might be picked up on the tape.
Any sounds such as a far off barking dog, a distant chugging tractor, ect. MUST be indentified on the tape so I don't
mistake them for possible EVP's.
Anyway....this particular day Megan went along with her and they traveled North
to a place called "Indian Hill" cemetery.
Both of them reported that aside from the chirping of a few vocal cemetery birds, that there was NO other noises to note.
Megan said that there was only the slightest of a breeze and for the most part,
the remote country cemetery was nearly silent.
So....as I was listening to the tape on my way to work a few days later, I became puzzeled by a series of sudden
relitively loud noises on the tape.
I rewound the tape several times trying to pinpoint in my mind where I had heard similar sounds before.

So I called Megan and she was adament that there were no such noises while they were there recording.
At this point I began to consider a possibly different source for the sounds.
It dawned on me that these noises sounded VERY simlar to the sounds I had heard on various Cival War movies as
the sounds of distant cannon fire!
They have a distinct "THUD or PHOOM" sound to them.
Megans husband is a local history buff, ESPECIALLY in matters of the Civil War.
Bascially, Wade can tell you in detail about every Civil War battle and skirmish that occured around here during the war
between the North and the South.
So I got "him" on the phone and asked him if he knew of any Civil War activity that may have occured near the
location where they had recorded.
He replyed that "Yes, there had indeed been a small battle near there, approximatly three miles from the cemetery."

Now...I'm not going to insist to you that these sounds are from a paranormal source.
I'm not going to claim that this recording is definatly the residual sounds from the Civil War.
However, I will tell you that I after finding out about the cemeteries close proximity to the battle field,
I do have to wonder if what we have here on our tape actually is a historical remnant of long ago.
For you the visitor who will play and listen to this file...you will have to decide for yourself. :)

NOTE:
This is a BIG file....4.28 MB so please give it time to load.
My apologies to those of you with a slow connection...I just didn't know how to make the file smaller
and still allow the listener to hear the full file.
By the way....this file has NOT been enhanced in any way.
There was NO filtering, you are listening to the original recording.
Remember...your media player may attempt to play the file as it is coming in.
If it does it will sound broken up.
Just let the file download completely and then click "PLAY" again and the file will play perfectly.
Be sure to turn your sound up on this one before listening as these appear to be sounds of "Distant" cannon fire! :)
Thanks and have a great day!
Greg Brammer