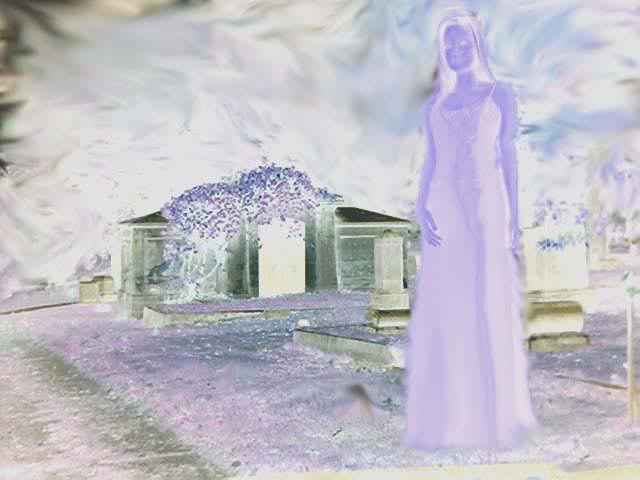 Artists Rendition - Not actual photograph. "Resurrection Mary is quite possibly the most famous ghost in the Midwest.
Her story begins on March 10th, 1934 where as legend tells it, a young girl named Mary Bregovy was attending
a dance at the "O'Henry Ballroom" which is now called "The Willowbrook" 8900 Archer Ave.
The story goes that sometime during the dance, Mary got into an argument with the young man she was
attending the dance with, left the ballroom, and began hitchhiking.

Somewhere in the vicinity of Resurrection Cemetery on Archer Ave, she was struck down and killed
by a hit and run driver. Not long after her death, the residents of the area began seeing a girl in a long
white dress and blonde hair hitchhiking for rides along Archer Ave.
There have been numerous accounts of people who claim to have encountered the spirit of Resurrection Mary.
Over the years, many people have claimed to have been driving down Archer Avenue and seeing a
beautiful blonde haired girl walking down the side of the road near the cemetery.
A few have even claimed to have stopped and given her a ride for a short distance, only to have her vanish from
their vehicle before getting any distance at all from the cemetery.
Local police have been called by concerned citizens that apparently have seen a young girl inside the cemetery's
locked gates as they drove by. Thinking that she was someone who mistakenly had been locked inside when the gates were
locked for the evening, they called police to tell them that a girl was locked inside the cemetery fence.
Police have responded to such calls with spotlights and their
public address systems only to find the cemetery empty.
During renovations at the cemetery in the 1970s, sightings of her ghost reached a peak, but are still reported
occasionally to this day.
Resurrection Mary appears along Archer Avenue in South Chicago.
Take I-294 to 95th Street. Follow 95th Street west to Roberts Road.
Take Roberts Road north to Archer Avenue.
Resurrection Cemetery, 7600 S. Archer Avenue,
Justice, IL

Below is a link to an excellent page devoted to Resurrection Mary.
Ghost Research Society During the week of June 6th, 2004, my Wife and I, accompanied by my Sister in law Melinda, her fiance Justin
and their teenage daughter Rachel set out for a week long Summer vacation in the City of Chicago Illinois.

I had visited there in the past....but that was before my involvement in the paranormal
and EVP recordings and research.
Since that time, I had become quite familiar with a couple of locations in Chicago that are considered to
be some of the most "haunted" locations in America.
Of course, there was no way I was going to miss the chance to visit Resurrection Cemetery, home of the
legendary Resurrection Mary.
We visited the cemetery on the evening of June 8th, 2004 and upon
arrival immediatly began a EVP recording session.
I always begin each recording session whereever I am by giving a little speech to any spirits that
might be listening briefly explaining what I am attempting to do and asking them to please tell me thier names
or to say anything else that they think is important.
Believe it or not...I get VERY good results from this procedure.
Apparently....like the living....they are still proud of their names and are sometimes almost anxious
to say them for you. If you record spirit voices...I really recommend doing this.
We had three recorders running while we were there. Strangely, the only recorder to pick up any anomolous
voices was carried by our Niece Rachel.
The following EVPs were extracted from her tape.
A few of them are very clear....and a few of them are not so good in quality.
However, I have decided to list them all here and let everyone hear them for themselves.
Unfortunatly....we didn't seem to hear anything from Resurrection Mary. :)
But as anyone knows who does this kind of thing....there are no guarantees that you will pick up anything at all!

The next recording abtained there was of what we feel might be that of an older woman
stating her name. See if you agree. "I" hear...."Grandma Hicks!"
"Grandma Hicks"
23 KB

We found this next EVP quite exciting!
Maybe I'm imagining what I think I am hearing...but to me it sounds like a man exclaiming....
I am ALIVE!
"I am ALIVE!"
44 KB