In the last week of May 2003, my Daughter and I had the opportunity to go into a fabulous old building.
It is in the town of Bevier Missouri....and is a reflection of times forgotten.
Its a ballroom, complete with dancing floor, stage and decorative woodwork.
In its day it must have been magnificent.
Now....it is forgotten for the most part....and is dark, dirty, and silent.
Pigeons now occupy the space where huge celebrations, dances and parties took
place at the turn of the century.

As it turns out....its also quite "Haunted".
However...from what I'v seen and heard, this "haunting" is not of the bad sort.
It is, in my opinion filled with the spirits - ghosts of those
who enjoyed the ballroom in its grander days in the past.

I took along my tape recorder and digital camera.
Although the room is nearly as dark as night, it seemed "alive" with energy.
I had a good feeling about it....and the results from my tape
and camera didn't disapoint me.
I started out as I usually do....by speaking aloud to any ghosts - spirits that might be there,
tell them my name and letting them know what I was about to attempt to do.
I invited them to try to say their names or to tell me anything else they might
like to. I then remained absolutly silent for several minutes to allow any
spirits time to respond. I asked my questions....and walked around the aging dance
floor quietly so my recorder could pick up anything my ears might not.
I took over fifty digital images there....and knew that most of them would probably
"not" turn out because of the extreme low light. All of the images were perfectly normal...
except one. I will be showing it to you and describing it further down this page.

As I expected...when I returned home and listened to the tape.....it
was FULL of the voices of ghosts - spirits! A couple of the spirits chose to introduce themselves.....but
most of the EVP's were of "comments" they were making about us and what we were doing.
From those comments, I was able to hear several "other" names being spoken.
I hope you enjoy these EVP's as much as I enjoyed "discovering" them on my tape. :)

The first EVP ghost voice recording is of a man with a clear voice announcing his full name.
Ed Turnbal
This EVP is unique from the others in the fact that the voice seems to echo off the walls
of the empty room just like ours did.
"Ed Turnbal"
58 KB

The next EVP ghost voice recording is of a female spirit saying something I can't "quite" make out.
I believe she was commenting on me, asking some other spirit something like....
"Whats the deal with that guy in there?"
"Whats the deal with that guy in there?"
33 KB In the next file we hear a woman asking....
"Who are they?"
"Who are they?"
21 KB In the next file you will hear a man saying what I believe to be his full name.
Its a little whispery....but still fairly clear.
Vernon Amidei
"Vernon Amidei"
53 KB Its important to note that the family name "Amidei" still exists in the Bevier,
Macon county area.
This file seems to be someone else who is wondering who we were.
Listen as this lady ghost asks....
"Who is it?"
"Who is it?"
12 KB The following EVP seems to be one ghost - spirit asking another for advice.
Its "whispery"....but listen carefully and I believe you will hear....
"Gerald! What'll we do?"
"Gerald....what'll we do?"
21 KB As I mentioned before at the start of this page....not only was
I recording.....I was taking pictures with my digital camera.
I was surprised to hear a lady spirit - ghost saying.....
"People taking pictures! Take one!"
"People taking pictures! Take one!"
46 KB I don't know what this next lady spirit was talking about....
but you can clearly hear her say....
"Wait a minute"
"Wait a minute."
33 KB Remember "Vernon" from one of the files above?
Well...this EVP sounds like another spirit asking Vernon....
"Vernon, what do we do now?" Perhaps this was because of us....and were wondering how they should respond to our questions.
"Vernon, what do we do now?"
58 KB I found the next EVP to be quite exciting!
It is a clear response from two different spirits in regards to my plea
for them to talk so I could try to hear them.
I had spoken aloud saying that I had in my possession a device that may actualy
let me hear what they say.
These two ghosts - spirits responded....still talking to each other....saying....
"We HAVE to TALK!" "They HEAR us!"
"We HAVE to TALK!" "They HEAR us!"
58 KB The last EVP "So far" that I have from that tape is of this spirit apparently
asking other spirits....."Why are people curious?"
I say "So far" because I still have a lot of tape from that building to go over.
As time permits in the future I will go over the remainder of it. I'm sure that
there are still lots of good EVP's on there to hear. :)
"Why are people curious?"
56 KB I mentioned earlier in this page about a certain digital image
that I took at this location. There are several things "strange" about it.
Here is the original. I apologize for the poor quality....but the room was VERY dark.
It is a view of one corner of the "back" of the ballroom where patrons used to enter it.
If you look carefully....you can make out the doorway that leads
to the staircase to the ground floor. 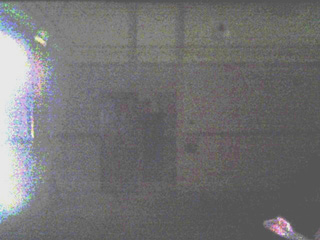 What first jumps out at you is the huge "White light" area to the left of the picture.
This area should not be there. There was NO light source on that side of the room at all.
In fact...that corner was quite dark.
The second anomolly in the image is the ghostly hand and forearm on the lower
right hand corner of the picture.
The last strange part of this pic is a part that I didn't even see at first.
While showing my Wife the glowing spectral hand and arm she pointed at the doorway and
asked...."Who's that?" After looking carefully....I saw what she was seeing.
It looks like three individuals standing in that doorway as if they are just coming
into the room. So.....I have lighted that part of the image and will show it to you
below. I also "outlined" the best I could of what I see of the figures in the doorway.
I will admit that this could just be a play of light...but it seems to be three men with
red hats. The first man appears to be heavy set and wearing suspenders.
As far as the "Ghost hand" goes.....WOW!!!
That is the best part of the picture....and I'v enlarged it for you to see better.
It seems to be made of energy...."glowing" energy! 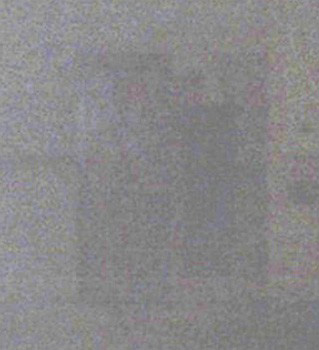 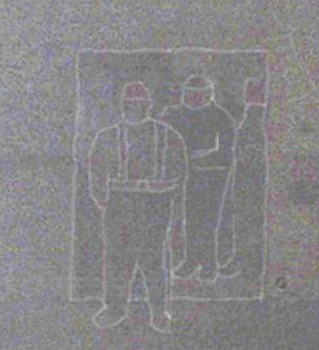 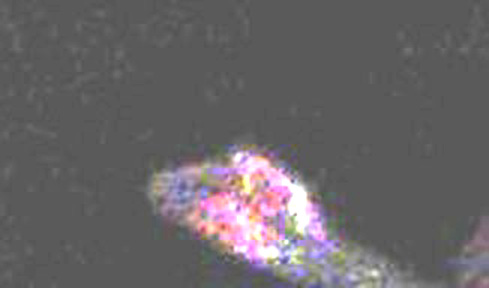