Please read before listening to our ghost - spirit voice recordings.

What you will hear.

The recorded voices you are about to hear differ widely from each other in a number of ways.
The quality of each EVP "ghost / spirit voice" varies greatly also.
When we listen to our recorded tapes trying to find EVP's "spirit voices", sometimes they jump
right out at us because they are so clear and distinct.
These are the type of EVP's "spirit / ghost" voices that require little if "any" filtering or amplification.
They are clear and clean and almost everyone that hears them hears the same word or
phrase being spoken.
These are the "Home Runs" of ghost voice recordings, but unfortunatly they only account for about 2%
of the voices we capture on tape.

The other and most common type of EVP's we encounter are voices found on the tape that are
"barely" there. These are the type of sounds that are usually so faint that sometimes you
wonder if you really heard them when you listen to the tape for the first time.
Once it is determined that something is there, the sound is transfered to the computer,
isolated and amplified. Once amplified, it is determined whether or not "filtering" the
static out from around the voice may allow it to be heard with more clarity.
Sometimes it works....sometimes it doesn't.
Most of the time, this type of EVP requires amplification and at least "some" degree
of filtering so that the voice can be understood.
Filtering out the static allows the ghost voice to be heard but it also sometimes leaves behind
soft, musical sounding harmonics mixed in with the EVP voice.
The "amount" of the harmonics varies from voice to voice.
EVP's in this catagory tend to be the type where some people will hear something entirely
different than from what others hear. This is a strange phenomena.
Voices that sound perfectly plain to some people will sound entirely different to someone else.
I call this the 90/10 effect.
About ninety percent of folks will hear "one" word or phrase, and about ten percent of
folks will hear something else.

So....when listening to the files try to keep an open mind.
I very well may be wrong in what I am hearing on some of them. I welcome emails at:
brammer@mcmsys.com
with any comments or to tell me if you hear something differently than what I have described.
Also....keep in mind that if the voices sound remote or mechanical at times, that these people
who are somehow speaking them, no longer have a "physical" voicebox.
Somehow....they are assimilating the "memories" of how they sounded when they were in "our" world.
We also do not know all the factors involved that cause the quality of the recordings
to vary so widely. Solar flares from the Sun, the position of the Moon and the Geomagnetic condition
of the Earth itself seem to influence ghost voice recordings....but much more research needs to be done.

Once again....when clicking on our files to listen to them, depending on your type of
sound player, the files may sound "broken up" the first time they come in.
This is because your audio player attempts to play the file before it is all the way downloaded
Simply wait for the file to completely download and it will play perfectly.

Thank you for visiting our site.....:)
Enjoy of files. Greg Brammer

The following file was captured at a old remote country cemetary near Elmer Missouri
on May 7, 2003. My wife and I were on a enjoyable sunny afternoon ghost hunt just
here and there and we happened to come across this old graveyard.
We came across a stone that said....
Jeremiah Johnson
Born 1820 - Died 1907
Amused that I had found a name that was the same as the Mountain man
folk legend Jeremiah Johnson I announce to my wife Terry....
Jeremiah Johnson Terry!
She replies...."The "Real" Jeremiah Johnson?"
Laughing about how she said that I answer...."I don't know....but he was born
a long time ago.....1820."
There is a short pause.....then you hear a scratchy spirit voice answer....
"I'm Jeremiah Johnson!"
This ghost voice is not the best quality we have ever captured...but its clear enough to hear
what is being said. "I'm Jeremiah Johnson!"
300 KB 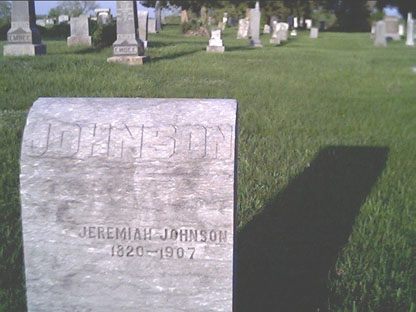 The following file was collected at the Old Mt. Tabor cemetary
East of Atlanta Missouri on May 7th, 2003.
To me....this EVP sounds like a child singing.
In fact....I visualize a small boy.....but who knows.
Perhaps this boy ghost - spirit is singing some old folk song....or perhaps he is letting us know how
he reached the other side. Its a unique EVP that is just a little bit strange.

This next EVP ghost voice was captured at the old Elmer cemetary in Elmer Missouri.
It provides yet another example of how ghosts are apparently conversing everyday
just like the rest of us. You will hear two distinctly different male
voices. The first....which is slightly unclear....seems to make a comment
about where he was born. We feel he is saying...."Born in Boston."
To which a second ghost - spirit inquires......"In Boston?"
More and more I believe that ghosts - spirits frequently
make comments about us....and each other.
In that regard they are still just like you and I.
"Born in Boston" - "In Boston?"
110 KB What follows is another EVP from the Mt. Tabor cemetary.
This loud spirit is making a statment....although those of us who hear
it seem to disagree about what that statement is.
So....here it is for "you" to decide.
We were near a newer grave from a young man named "Nathen" when
this ghost voice was recorded.....and knowing that, perhaps it is influencing what I
hear this lady ghost saying. I feel she is saying.....
"Nathens learning."

This next EVP ghost voice recording was taken at the same location and has us a bit confused.
It sounds like a womans voice....and there doesn't seem to be
any disagrement as to what's being said......
Its just that we don't understand "Why" its being said.
Listen to this female spirit clearly saying.....
"Purple Heart"

This next EVP ghost voice recording from the same location made us grin and apparently
is proof that even in the afterlife, we retain our sense of humor.
We are not sure if the male spirit speaking here was responding to something
"we" asked....or was simply making a general statment of how sometimes.....
"Shit Happens."

This EVP ghost voice recording is also a bit confusing.
It seems to be a womans voice.....saying something about someone
being held in a prison. What we cannot make out is what she says
when she is apparently pronouncing the name of the prison. If you
think you can....please email us and let us know what you hear.

This next incredible EVP was collected by Melissa at a residence
in the Moberly area. What makes it incredible is the fact that we feel
we are hearing at least part of a conversation between SIX different ghosts - spirits!
We don't know exactly what is being discussed here....only that
it seems that a couple of the spirits are preparing to leave and a few of
the others are commenting on it.
I have included two versions of the file. The filtered version and
then a slowed version. The quality is sometimes a bit fuzzy....but listen
to it a couple of times an the voices will materialize better for you.
Its a big file...so give it a couple minutes to come in if you choose to listen to it.
Here is what is being said:

In the early morning hours of May 8th, 2003, during a geomagnetic storm,
my friend Melissa and her younger Sister Charlotte had an encounter with
a ghost - spirit that left them both excited yet slightly shaken.
Melissa had been up late studying for a college exam.
The time was approx. 1:30 AM.
Her Sister, who had also been staying up late
with her, had fallen asleep on the couch.
Its important to add here that the two said that they had NOT been discussing
ghosts or EVP's or any other paranormal subject.
Melissa had gone to the kitchen to get some ibuprofen and was standing there
taking the lid off the bottle when she happened to look back into the room
where Charlotte was sleeping. Instead of seeing her Sister sleeping peacefully,
she saw instead that Charlotte had awakened and was sitting up looking at her.
Her eyes were wide with a look of shock and disbelief.
After several seconds
went by, she suddenly snapped out of her shocked state and began crying and yelling
in near hysterics for Melissa to come out of the kitchen and come to her.
When Melissa finally got her calmed down, Charlotte explained that she had
awakened, looked into the kitchen, and was surprised to see a woman standing close behind
her Sister, apparently appearing like she was trying to see what kind of medication
she was about to take. Charlotte explained that at first, she was wondering who that
was, as if company had unexpectedly stopped by while she had been sleeping.
It wasn't until several seconds later that she realized the woman was a apparition.
She described the friendly ghost in great detail, saying that she had dark tanned skin, was wearing
a orange T-shirt and had her brown hair pulled back in a low ponytail.
She described her as being very pretty.
Charlotte said that it wasn't until she started yelling that the apparation vanished.
After calming her Sister, Melissa grabbed the recorder and got it running to see if she
could capture any EVP's from their ghostly guest.
Although only one ghost became physically visible....it seems there were "two" lady spirits
there that night. The EVP's that follow are what were collected.

I consider them to be important....because from what one of the spirits says....it
seems to indicate that they were planning on doing something "after" the girls had
fallen asleep. In the first file, you will hear the last of Charlotte's sentence.....
asking the spirit she saw to tell us "What your name is?"
In which the sprit - ghost lady responds...."Ethel or Linda Rosepalm or Filsbalm" or something like that.

In the second file....you hear a lengthy sentence spoken by the second ghost....
apparently concerned that "Ethel" was going to do something while the girls were
still awake. Charlotte had just made a comment that "I was really tired....but now
I'm wide awake!" The second sprit responded to that comment by saying.....
"Ethel, wait then....those girls who talked are NOT sleepy!"

"Ethel, Wait then, those girls who talked are NOT sleepy!"
105 KB

"Ethel, Wait then, those girls who talked are NOT sleepy!" Slowed Version!
313 KB


Click Here to go back to the "Ghost-Voices.com" Homepage!